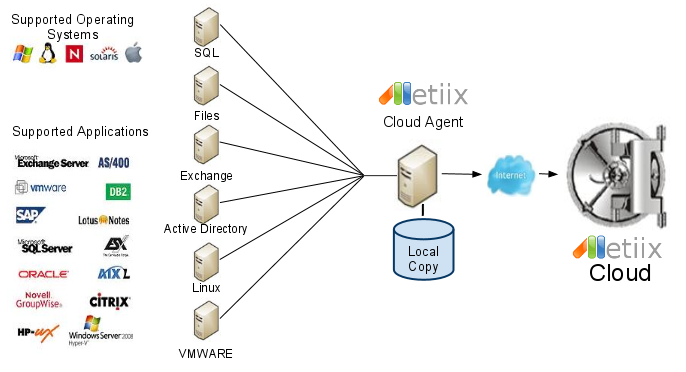 The Metiix Cloud Backup Solutions powered by AsigraTM requires no agents, which makes it easier to install and support than legacy backup and recovery solutions.

Backup and recovery software typically requires agents that are installed onto the host servers that a system administrator wants to back up. Even in a modest-sized environment, agent management can get extremely complex when an administrator is forced to deal with different operating systems and revision levels. The complexity of agent management is further complicated by the growing number of software packages that also require agents running on the same host servers, or what is also referred to as “agent pollution."

The Metiix Cloud Backup Service does not require any agents to be installed but instead reaches out over the network to back up operating systems, file systems, and applications, using industry standard programming interfaces.

Reasons Why Agent-less Is Better:

We are able to protect all of your primary servers...

Metiix Cloud ensures that we do not consume too much...

Cloud is an automatic, set and forget approach. Our...

We have three types of storage, Metiix Cloud,...

As data changes on a computer, we are able to detect...

To ensure the smallest amount of data is transferred...

There is no practical limit to the size of file that...

After the initial backup of the data, any changes to...

Retention is advanced and simple to configure....